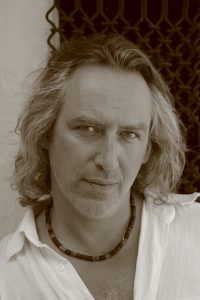 Born in Marseille in 1963, Louis Winsberg began playing the guitar with a group of gypsy friends at the age of twelve forming the group Los Reyes, which would later become the Gypsy Kings. He studied classical guitar for two years, working by himself jazz and participates in courses led by Christian Escoudé and Gerard Marais. In 1979, he moved to Paris and began performing in clubs in Paris, while continuing his studies at High School Musical de Sèvres.

In 1981, he participated in his first recording with Los Reyes.

In 1983, he won the first soloist prize of the Concours National de la Défense. TSince then, he has become a prominent figure in the French music scene: as professor at the CIM in Paris, he has played with several artists including Antoine Illouz, Antoine Herve Elisabeth Caumont, Eric Le Lann (with which he recorded with Mike Stern, Eddie Gomez, Mino Cinelu and Paco Sery).

The meeting with Jean-Pierre Como and Paco Sery in 1984 resulted of the formation of the Sixun group, with whom he recorded 9 albums, 3 clips and performed numerous tours in France and abroad. Louis Winsberg is one of the first in France to have used the synth guitar. He is very attached to research on the melody, harmony and timbre. He is very interested in ethnic music and their rhythmic aspect.

In 1987, he created his own trio based on original compositions and at the end of 1988 he recorded the “Appassionata” album, which affirms his creativity.

After the flight of Sixun (1990-1991), he took advantage of a year “off” to repeat the experience and recorded his second album as a leader: “Camino”. He then formed a quartet and success helping, makes a big tour in France and Africa, and participated in the Midem 92.
He also works with the contemporary dance company “L’Esquisse” (Bouvier / Obadia), for which he composes the music of “Plein Soleil” (Universal Exposition in Seville, Avignon Festival, Opéra Garnier in Paris).

In 1992, he signed with Sixun Polygram Verve for which they will realize two albums and a compilation. The same year, he recorded an album in duo with the guitarist Sylvain Luc: “Petits déjà…”

In 1994, Sixun moved to New York for six month to do concerts and will record their second album for Polygram, “Lunatic Taxi” they will record in the studios of Power Station.

In 1997, the 5tet “La Danse du Vent” is going on a long tour across France (over thirty concerts). Louis Winsberg has an appointment with his faithful and large audience, which warmly welcomes this new show. In 1998 he recorded the 9th album with Sixun, “Nouvelle Vague” which will be released by Warner, followed by a tour in France.

In early 1999, the 5tet gives twelve concerts in East Africa, then plays at the Festival of Merida in Mexico and appears regularly in the French festivals.

By this time Louis has in mind a multicultural project. He began studying flamenco and meet musicians from that environment. He will also work with the Doky Brothers, for whom he recorded several albums and will tour in Scandinavia in the company of Gino Vannelli and Randy Brecker. Afterwards, two albums will go out which he has participated: the album “Laddé” from the Touré Touré brothers (who themselves participated in the latest album of Sixun) and “Tribal Traquenard” the first solo album by Stephane Huchard.

During April 1999, he performed a series of concerts in the quintet of Marc Berthoumieux for the album “Les Couleurs d’ici”, a tour that will bring them to Mexique. In the fall of 2000, Louis Winsberg participates in recording the new album of Claude Nougaro and the spectacle at Le Palais des Congrès. He did not neglect the off collaborations with friends and participating in albums of Alfio Origlio and Miguel Sanchez.

At the beginning of 2000, the Phoenix of Valenciennes hosts “Jaleo” in residence for two months, offering exceptional working conditions to the group. The show is created on March 30, meeting a great success with the public, and runs in France since the beginning. The disc, recorded between the South of France and Paris comes out October 23, 2001 on Earcy / Universal Jazz.

In 2002 and 2003, “Jaleo” bewitches a growing and very warm public. 2003 was the year of the 100th concert of Jaleo! After a nice tour with the 1st Jaleo, Louis Winsberg and the six musicians of the group benefit from a residence in Istres in autumn 2003 to work on a new show. This is the record of this new adventure that was released in January 2005: “Le Bal des Suds”.

In December 2002, Louis Winsberg is on tour in Japan with the famous Japanese saxophonist Sadao Watanabe and in July 2003 in Scandinavia with Bill Evans. He also participated from 2002 to 2006 to show tours “Kurt Weil” and “J’ai deux amours” Dee Dee Bridgewater in Europe, USA and Japan. This is in Coutances at the 2006 Festival that Dee Dee and Louis will make a memorable concert simply duo: culmination of their collaboration.

In residence at Coutances (Jazz sous les pommiers) since 2004, Louis Winsberg continues his meeting with the “guest musicians” during “Winsberg.World.Work”. The W.W.W. born of informal evenings Club in Paris. Around a trio composed, guests improvising on themes inspired by this family of “traveling musicians”. It was during one of those nights where the theme was Spain, was born “Jaleo”.
The 3 Africas met in Coutances in May 2005. In his constant desire to gather sounds, create new bridges between cultures and broaden musical paths, Louis Winsberg continues on his way towards those Africas as diverse as powerful, connected by the songs and rhythms that come here to mingle naturally, from the Maghreb to Senegal and Madagascar. Louis Winsberg for the WWW 3 Africas will be surrounded by Karim Ziad (drums), Solo Razaf (vocals & guitar), Diogal (vocals & guitar) and Jean-Christophe Mayar (saz).

In 2006, for his last year of residency Louis Winsberg will perform in Coutances with Sixun for the 20th anniversary tour.
Meanwhile Louis Winsberg does not neglect the Jazz and returns to the source of the music by improvising on the French song standards. The recording of the album “Douce France” is carried out in autumn 2006 with Ira Coleman and Stephane Huchard (e-motive records).
In December 2006 at the end of a tour “Jaleo”, Michel Fugain asked the Louis Winsberg’s group to participate in a recording of his song “Hallelujah”. The incredible energy of the group seduces the singer and the collaboration does not will stop there.
Throughout the year the director Jean-Pierre Bessières films and directed a documentary on Louis Winsberg “Le voyage de Louis”

In 2007, Louis Winsberg is shared on the road between “Jaleo” and “Douce France” for the release of this album

In 2008, he initiated a new project “Marseille Marseille” in residence at Echirolles with the Grenoble Jazz Festival and released with Sixun the album “Palabre”.

At the end of the year he received the Django d’Or in the category “Best Artist confirmed.” 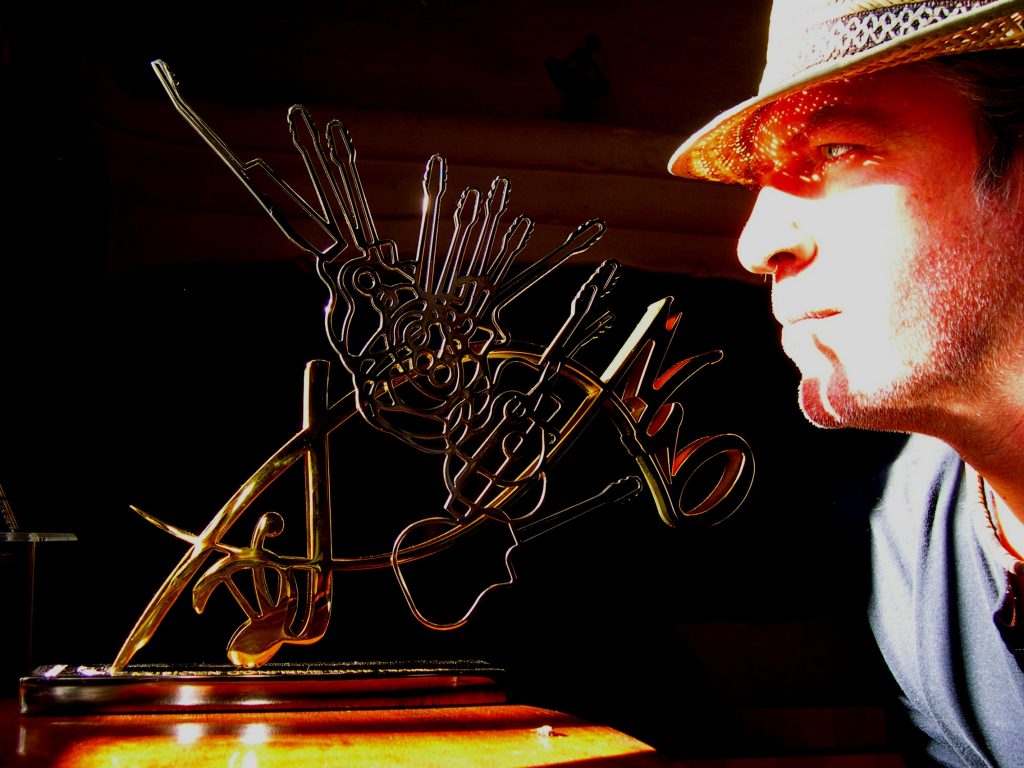 In 2010, the Cultural Division of SACEM which supports him for many years invited to perform at MIDEM with “Jaleo”. Louis will perform on many festivals around the world (Tahiti, Seoul, Fez, Antananarivo, Las Palmas, Wroclaw…). He also participated in the Django 100 tour alongside Romane and the Ferré brothers. At the same time, Sixun celebrates its 25 years with the DVD release “Live in Marciac”.

2011 will see the release of his new album “Marseille Marseille” and the creation of the young audience show “The travel Carabalas” with Minino Garay.

In 2012, Louis is the artistic director of Maurane tour “Fais-moi un fleur”. He is accompanied on stage by Jean-Christophe Maillard, Stephane Huchard, Jerome Regard and Pepito Montealegre.

From 2009 until today, Louis has been developing albums and traveling on tour: the CD “Marseille Marseille” (2011) was a hymn to the Mediterranean, “Fais moi un swing” on tour with singer Maurane (2012/2013) and the album “Gypsy Eyes” (2014); the latter being accompanied by Rocky Gresset and Antonio El Titi, featuring gypsy flamenco guitar and stemming back to his early playing days. In 2015, he produced and directed the album for singer BERLINE, and in March 2016 “Mes Révérences” was released. Most recently, he has created the third album with “Jaleo”, “for Paco”, which will be followed by a European tour in 2016.